DIGITALIZED FIRST 13 SERVICES OF THE MINISTRY OF ENVIRONMENTAL PROTECTION

Belgrade, February 25, 2022 – As of today, the first 13 services of the Ministry of Environmental Protection intended for the economy have been digitized and available on the eGovernment Portal. The new electronic services of the Ministry, with the already existing 29 services for the economy previously introduced by the ePAPIR Program on the eGovernment Portal, are only the first step in the accessibility of public administration through electronic communication and obtaining permits and licenses in a simple and fast way.

By digitalizing administrative procedures, we facilitate and enable businessmen in Serbia to do business cheaper and faster when submitting and obtaining permits and licenses issued by the Ministry. It is extremely important that we put the public administration in the service of every citizen and every company, and that visiting the counters is no longer the obligation of either the citizens or the economy. Therefore, we will continue to work intensively in order to provide them with public administration services at their fingertips – said the Minister of Environmental Protection, Irena Vujović.

Vujović stated that the Ministry will be able to provide other services electronically by the end of the year, emphasizing that the priority is the digitalization of administrative procedures and services in the area of the “Green Agenda”.

The Director of the Office for IT and eGovernment, Dr. Mihailo Jovanović, points out that the Ministry of Environmental Protection is one of the first ministries dedicated to the digitalization of all services it provides to citizens and the economy.

As of today, we can use the first 13 digitized procedures / services for the economy in the field of environmental protection. By digitalizing these procedures, we facilitate and enable cheaper and faster business for almost 2,250 businessmen in Serbia when submitting and obtaining permits and licenses issued by the Ministry of Environmental Protection. We put public administration at the service of every citizen and every company. Visiting the counter must no longer be an obligation of either the citizens or the economy – said Jovanović.

The Director of the Republic Secretariat for Public Policies (RSJP), Bojana Tošić, pointed out that to that end, the Government has provided a comprehensive approach to the simplification and digitalization of public administration services.

In order to improve the business environment and reduce the administrative burden on the economy, the Government is implementing a comprehensive reform process to make public administration at the service of the economy and citizens. With the ePaper program, in a unique and comprehensive way, the Republic Secretariat for Public Policies, in partnership with the economy and public institutions, coordinates the process of simplification and digital accessibility of public administration services. We have prepared and made publicly available 42 digital services for our businesses on the eGovernment Portal and 10 services on the Portal of the Ministry of Mining and Energy. The greatest support in digitalization has so far been provided by the Fund for Good Governance of the United Kingdom and the British Embassy in Belgrade through the project Improving the Business Environment in Serbia, implemented by the International Finance Corporation (IFC), and GIZ in digitizing services of the Ministry of Mining and Energy . That we are doing this job well is confirmed by the award that Serbia won at the global competition organized by the Open Government Partnership, where ePAPIR won second place in the competition of 18 European countries, as a reform with the greatest impact on citizens and the economy. – Tosic pointed out.

The first digitized administrative procedures of the Ministry of Environmental Protection include, but are not limited to, issuing permits and amending permits for the import / export of protected species of wild flora, fauna and fungi, fluorinated greenhouse gases, and products and / or equipment containing fluorinated gases. greenhouse effect.

You can see the list of digitized procedures of the Ministry of Environmental Protection on the link HERE. 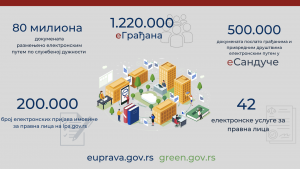